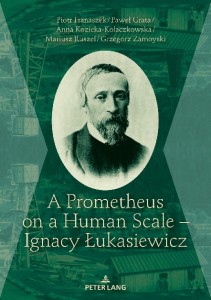 167 years ago, on 30th March 1853, the first kerosene lamp, constructed by Ignacy Łukasiewicz, was lit in the exhibition window of Mikolash’s Lviv pharmacy.

Ignacy Łukasiewicz was born on 8 March 1822 in the village of Zaduszniki in Tarnów County, as one of the children of Apolonia Łukasiewicz, whose maiden name was Świetlik, and Józef Łukasiewicz. In 1830 the family moved to Rzeszów, where two years later Ignacy started learning at the local Piarist Gymnasium, in buildings currently occupied by the Stanisław Konarski High School.

After completing four classes of the school, in June 1836, Ignacy started an internship at Antoni Svoboda’s pharmacy in Łańcut. After passing the exam for assistant pharmacist Ignacy continued to work as assistant to Antoni Svoboda, and on 6 October 1841 he took a job as an assistant in Edward Hűbl’s pharmacy in Rzeszów. After the defeat of the Cracow Uprising, Łukasiewicz, suspected of conspiracy, was arrested and imprisoned for a year. After his release on August 15, 1848, he started working as an assistant pharmacist, this time in Lvov, in the pharmacy “Under the Golden Star”, which belonged to Piotr Mikolasch, MA. There he focused on the study of chemistry and pharmacognosy, the study of medicines derived from plants.

Thanks to Mikolasch’s personal intercession to the Austrian authorities in 1850, Ignacy Łukasiewicz began his studies at the two-year Pharmaceutical College at the Faculty of Philosophy of the Jagiellonian University. He graduated as planned and obtained a master’s degree with the “very good” mark. After returning to Lviv, Łukasiewicz first worked with crude oil, cooperating on distillation with his colleague Jan Zech in 1852-1853. Their efforts led to obtaining kerosene and inventing an kerosene lamp, which was lit for the first time in 1853 in the Mikolascha’s pharmacy.